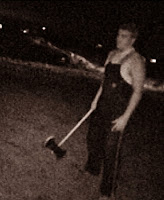 This was originally planned as the first part of a prequel to our previous short, Ginachie's Horrible Tales of Lies and Deceipt: Episode II: The Intruder. We shot it on New Years Eve into 2004 in an abandoned field in Metamora, IL. In this installment "Ginachie" (Brandon Delaval) must battle the evil "Godfather Maru" (Jeff Mischler) in order to secure the "Great Power of Ginachie." We planned it as a trilogy but we never got around to shooting part 3 so this became the final chapter during post-production.

Watch The Final Fight of Ginachie.
Posted by David Zimmerman III at 3:25 AM