Although my own personal projects are stuck in development hell I am still keeping busy here in California. Along with some independent writing I have also been keeping busy on other LA based projects. 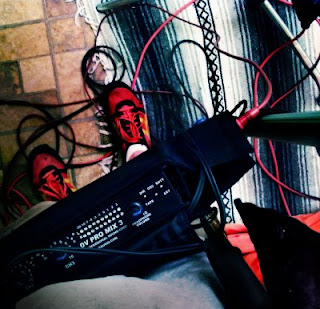 Just yesterday, in Altadena, I worked as a Boom Operator/Mixer for the short film project "SISTERS." Mishi Reyes was running the production department in a slew of different jobs. It was a fun group of people to work with, which made the day more enjoyable. (Pictured above is my view, looking down at the mixer)

In my free time I have been intensely cutting an independent feature. I have been working on it for the past few months, it is tentatively titled "DECKERS DEAD." It is definitely a much bigger project than originally expected but it is going well. It is still in the rough cut stages but I almost have a full cut of it done.

I have also been doing a lot of work in Reality-TV, more on this as these shows are officially announced.
Posted by David Zimmerman III at 11:42 PM