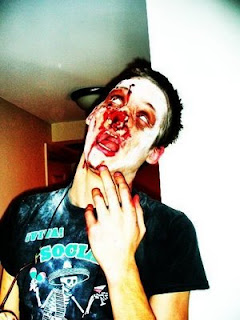 So when I was in film school we began a Zombie series known as the "DAY SERIES." We ended up making 2 films before I got out of there. The first one we did in 2006 for my production II class. Then in 2007 we revisited the series, this time with Jennifer Larson at the helm. They are both shot with a bolex in color on 16mm and all of the sound is done post-sync (recreated during the editing process). Both films feature Jake LaDuke as "Tyler" and Amelia Johnson as"Catherine." The sequel also features Me and Rachel Corsini as new characters and a slew of actors playing the undead. Gore effects on Part 1 were done by William Hasty. Part 2's Gore effects were done by Bryan Butt (Pictured above). Although they were for classes we treated them as though they were an actual project.