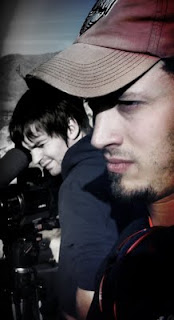 This past Saturday Edgar, Levi, and I went on a location scout for our upcoming project THE MAGIC STONE. We took a camera along and shot a bunch of test footage in the desert. It was a long, adventurous day in the car but it was well worth it in the end. We left the desert with some great material that could be used in the film if we need it.

THE MAGIC STONE is a supernatural/psychological thriller written/directed by Edgar Michael Bravo and produced by John Paul Rice and Levi Steven Obery. Rumor has it that I will be shooting the film but time will tell on that one.
The film will be a co-production of No Restrictions Entertainment and Ten Thirty-One Pictures Entertainment Inc.

More details in the days to come. Production is set to begin in early December.
Posted by David Zimmerman III at 5:42 AM