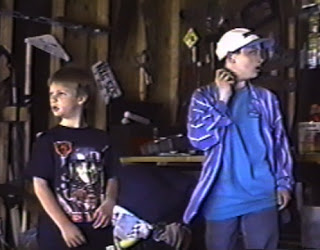 In preparation of Scream 4, I have gone into the archives and dug up some material from our incomplete Scream Fan Film, total SCREAM.  This project was in the works beginning sometime in 1997 until the middle of 2000 (basically my 7th grade, 8th grade, and Freshman Year).  At first, it was a remake of the original film which we were calling Scream: The Kids Version.  But then as the Hollywood sequels were released we wanted to do more than just remake the first.  We wanted to add elements of the sequels into our movie as well.  Re-imaginings were still called remakes back in those days but what we were doing, by today's definition, was a re-imagining.  We were mixing scenes from the entire trilogy and taking artistic license by adding original scenes, characters, and new death sequences of our own as well.  Some of the material is downright gruesome, especially for our age, we were some sick, sick kids.  It was an insanely inspired and ambitious undertaking in honor of a series that we were absolutely obsessed with.  Sadly, like our Kid Rangers flick, we shot an insane amount of material for it but we never actually shot an ending/killer reveal.  As you may know, a movie in the Scream franchise definitely doesn't work without an ending.  So aside from us watching the footage tapes every once in awhile, the material has been hidden from the world for the last 10 years ...Until now...

WATCH TRAILER!
Posted by David Zimmerman III at 1:38 AM