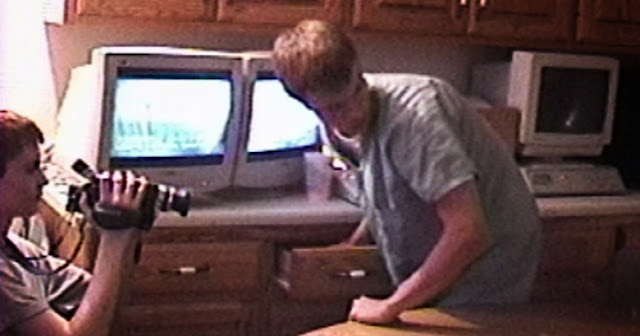 This years Z3 Films Basement Halloween Exclusive Clip comes from our 2002 fan film HALLOWEEN: HADDONFIELD REVISITED.  It originally premiered on November 16, 2002, which makes this year its 10th Anniversary.  Unknown to most, while working on the final cut for the DVD back in 2002 the hard drive containing all of the materials died unexpectedly.  So it was never actually completed as we intended.  So for the 10th Anniversary I have taken what raw material still exists from production and fully re-cut the opening of the movie.  It was shot entirely on Hi8 and Digital 8, this opening contains material from 6 different shoots that were spread throughout production.  Enjoy and Happy Halloween!  Pictured above are Levi Obery (Left) and Myself (Right) during Shoot 3 of the Opening Sequence.

PLAY
Posted by David Zimmerman III at 12:00 AM