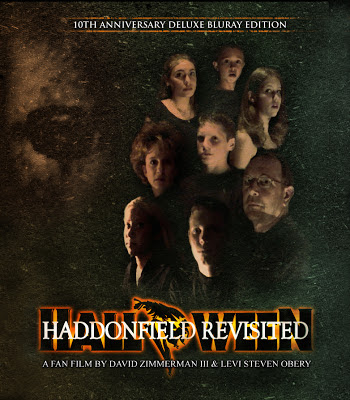 Although this movie cannot be officially released since its a fan film, that still hasn't stopped me from building the Ultimate Deluxe Edition for its 10th Anniversary. It was Constructed for many reasons: partly as a gift, a Blu-ray production test (practice for the upcoming Into The Woods Blu-Ray), and using the 10th Anniversary as an excuse to finally put the movie into a more completed form (with extensive bonus material). This joins the rest of our projects on the shelf and gives an extremely comprehensive look at our film making process from back in 2002. I'm very happy to have completed this and excited to move on to new projects in 2013!

You can view the remastered opening sequence HERE, and watch the 10th Anniversary Retrospective with Levi and I HERE.

Into the Woods Blu-Ray Specs COMING SOON.
Posted by David Zimmerman III at 11:26 AM