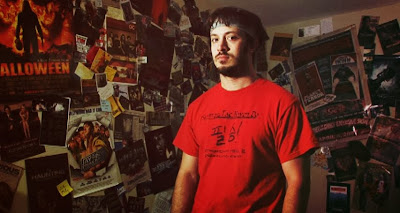 In late November 2011, I was shooting a little experimental project hoping that it would help me find some enjoyment in packing up my belongings (with sights set on moving back to Glendale, Ca).  When I was younger I had done similar projects, oftentimes I would convince my brother and friends to help me clean our basement studio by saying that I would shoot the process and then make it look "Really Cool in Fast motion."  I was able to get away with this numerous times until they eventually caught on and stopped helping me.

The initial plan was to finish up this little short and bring it to Illinois to show family and friends during my return for the 2011 Winter Holidays.  But then on December 2nd, a week and a half before I was set to fly back home, my Grandpa passed.  So I traveled back to Illinois early and this project was indefinitely shelved.  He always loved my stop-motion animated logos and when I would bring various toys to life.  Since this project is using a very similar technique (although adding in human interaction as well), I'm sure he would have gotten a kick out of it.

So this project has collected dust for the past two years, alongside a few others.  I ended up shooting an extension to it while we were living in Glendale (the place we were moving to during the initial shoot).  This extension just so happened to be shot the following October, as we were starting to pack up to move to another new apartment.  So I thought it would be humorous to have things start to disappear again (not that moving once a year is funny in the least bit, ugh).  So today is January 18, and in memory of my Grandpa I give you EVERYTHING DISAPPEARS.
Posted by David Zimmerman III at 12:00 AM