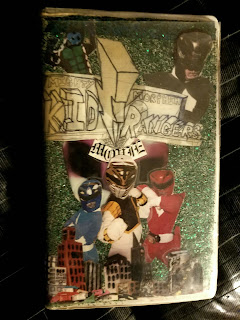 With the new Power Rangers movie coming out this week.  I felt that it was the perfect time to release something from our defunct Power Rangers fan film.  So I dug back into the archives and cut together a show intro in the style of the original series.  A few titles and some minor visual effects work was done but it is constructed from material shot by our 90's counterparts.  This epic project was shot from 1995-1999 within the production of a handful of other projects.  We were rarely bored back in those days.  I even found and included a Power Rangers inspired animated version of our Zim Home Video logo.  Also pictured to the left is the original homemade VHS cover artwork.  Check it out HERE!
Posted by David Zimmerman III at 6:39 PM