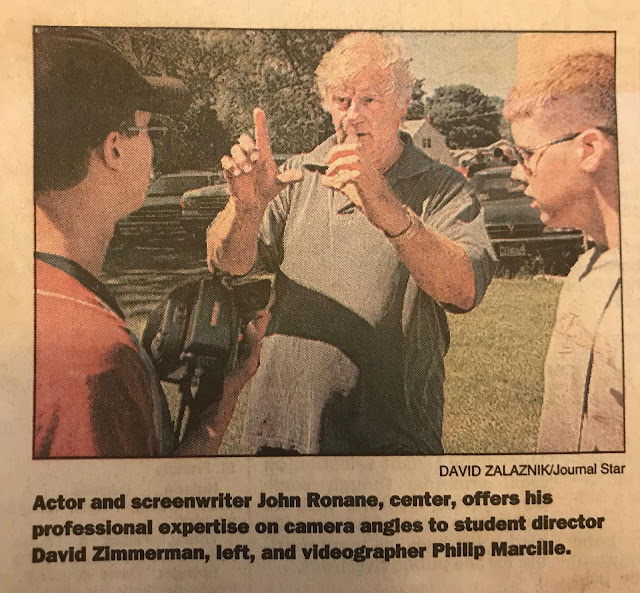 I first met John at the end of my Freshman year of high school during a Spring Extension program.  His wife Carole, was teaching a course on film making and brought him in to talk to us about his wide range of experiences in the  Film/TV business.  He actually wrote a short screenplay for the class titled Summer Lesson, which we were given the task of turning into a short film in only 2 days.  We chose to use the first day for production and then spent the whole second day editing at my house.  I still remember him showing up at the end of the first day while we were shooting the finale.  It was a bit nerve-racking having him on set but at the same time I felt honored.  The guy had lived and worked in the film business.  Something I wholeheartedly wanted to be a real part of someday.  As seen in the photo above - John, Phil, and I were discussing our shot list for the scene.  I remember him talking to us like we were fellow artists, collaborating, and not just telling us what we needed to do.  We felt like real professionals that day!  We shot in on Hi8 and VHS-C and cut linearly in my bedroom with a VCR and a VHS Camcorder - mastering to VHS.  You can check out the final film HERE!

After this project I began doing end of the year SCHOOL VIDEO YEARBOOK'S, which his wife Carole oversaw but gave me an incredible amount of artistic freedom.  These videos actually ended up being pretty extensive and even feature length.  They played at the Senior Awards Assemblies at the end of my Sophomore, Junior, and Senior years.  John actually showed up to these screenings.  Afterward we would discuss the videos and he would mention little details that he noticed.  After a years worth of work it was awesome for someone to actually point out some of these details, which to most may seem minor but actually took a lot of thought and energy to execute.  It charged me up and inspired me to keep pushing myself.

I have not seen him or Carole in several years but have kept in touch off and on through social media since graduating high school in 2003.  They set my sights on Columbia College Chicago way back in 2003 when I was about to graduate high school.  They even recommended a move to Los Angeles - way before I ever thought that it was a real possibility.  Without them I'm not sure where I would be right now.  I will always be grateful to him and Carole for believing in me and pushing me to pursue my dreams!

John's memorial website is available at www.deitersfuneralhome.com, where condolences may also be sent to the family.  Memorial contributions may also be made to the American Cancer Society.