The fourth and final entry in this series of logo creation behind-the-scenes vignettes is the Z3 FILMS logo.  It went through several variations over the years but the four below were used the most.

Oddly enough the original "Z3" logo plate was drawn using the spray-paint brush in Microsoft Paint. It was then superimposed on top of a fiery video plate from one my first movies, The Battle of Yorktown (1994).  I used it this way, without any additional text, for several years.  Then in the early 2000's Levi Obery added the additional "FILMS productions" text to it to be used at the top of Halloween: Haddonfield Revisited (2002), and then updated and removed the "productions" part of the title for The Only Way (2004).  I would sometimes alter the colors or speed depending on the project but overall it stayed mostly the same.  I haven't needed a new logo for anything lately (since I've mostly been working in post-production for TV) but potential ideas have been creeping into my mind for years.  So after my Wedding in October 2016 - I decided to finally push through and create a new logo, for my Wedding Documentary, and for future projects. 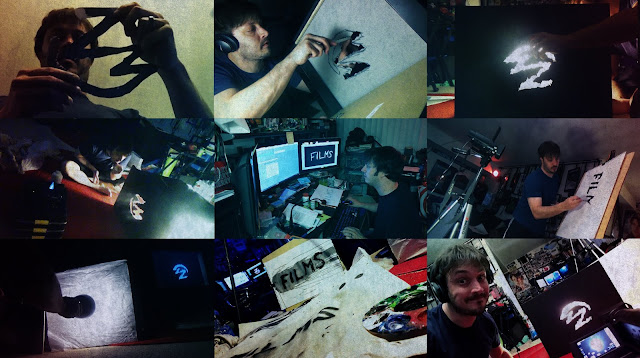 DEVELOPMENT/PRE-PRODUCTION:  This new logo went through several iterations. My original plan was to rework the original Z3 animation with new "Films" text added.  After much experimentation I realized that this was not enough of an upgrade considering the master footage was from VHS.  So I decided to start from scratch.

PRODUCTION PART I: I used the original "Z3" logo as the basis by creating a stencil using a print out.  Then I traced it onto the back of a black canvas.  I then lit it up and animated the logo ripping through the canvas frame by frame.  Then I added some practical smoke to it (a.k.a. baby powder) for a little ambience and moved the light around behind the cut out a bit to give myself some additional options.  It was a very low budget and practical-based process but it did the trick.

PRODUCTION PART II/POST-PRODUCTION: The second part took much longer and much more experimentation.  I began to paint, sketch, and experiment with digital text for options of the "FILMS" element.  Several different versions were combined with the animated background logo plate to see which one was the best.  Eventually, after several months (maybe years) of work, I settled on my favorite and a new Z3 FILMS Logo was born (see below)!  Check out a behind-the-scenes video of the process HERE! 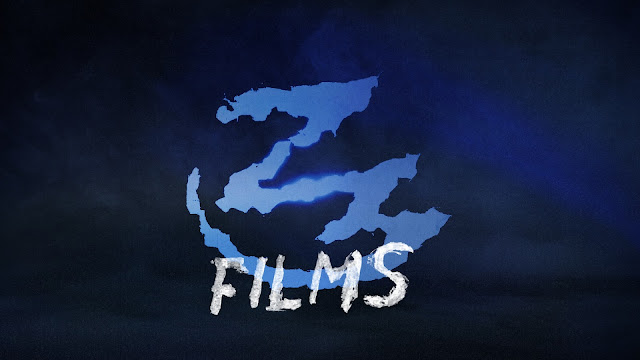